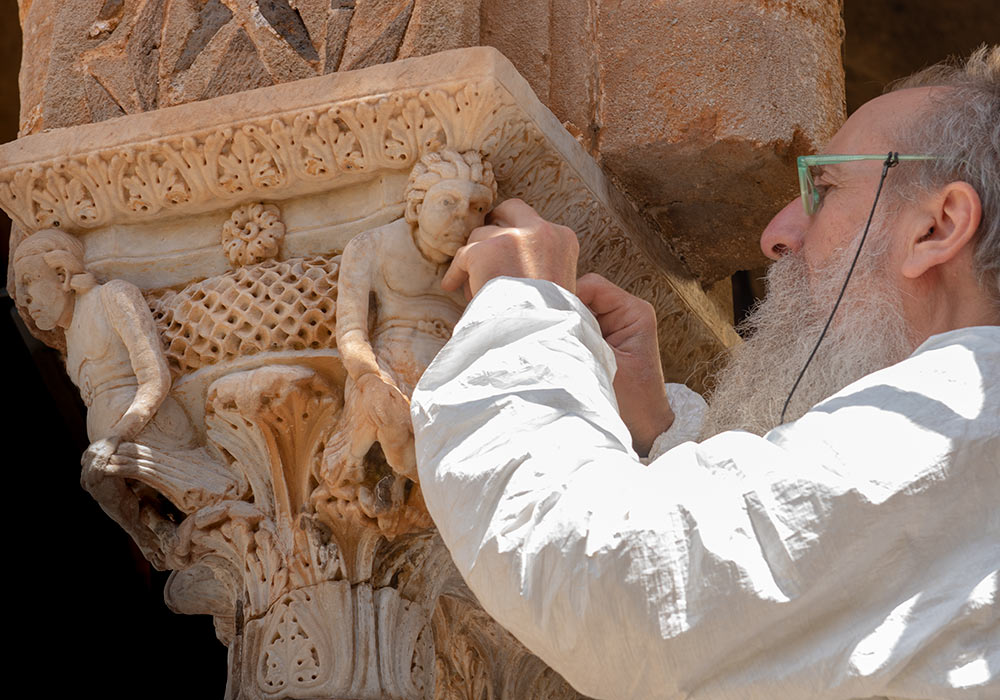 The Benedictine Cloister at Monreale (Chiostro dei Benedettini: opening hours Mon–Sat 9–6.30, Sun & holidays 9–1) was completed c. 1200. It measures 47x47 metres and is located on the south side of the cathedral. Each side has 26 arches resting on columns. The splendid capitals include narrative cycles from the Old and New Testaments. 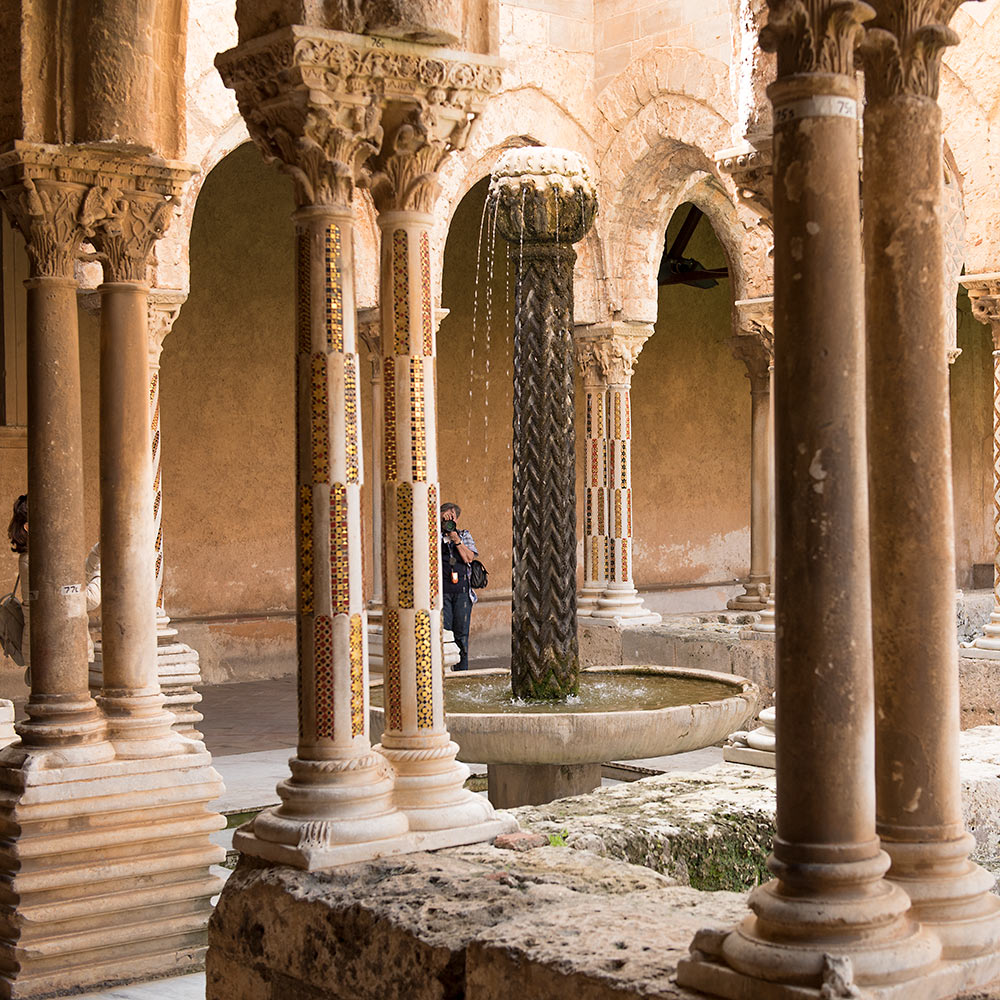 The fountain in the southwest corner of the cloister garden. The column carved like a stylised palm tree forms a fountain, used by the monks to wash their hands before entering the refectory, now a favourite pool for pigeons. The symbolism of the various elements here alludes to the rite of baptism, according to Blue Guide Sicily.

The Arab-Norman arches are borne by 228 twin columns. All columns - many of them decorated with mosaics or reliefs - have beautiful carved Romanesque capitals. The capitals are the work of five master craftsmen, according to Blue Guide Sicily, but only one capital is signed. 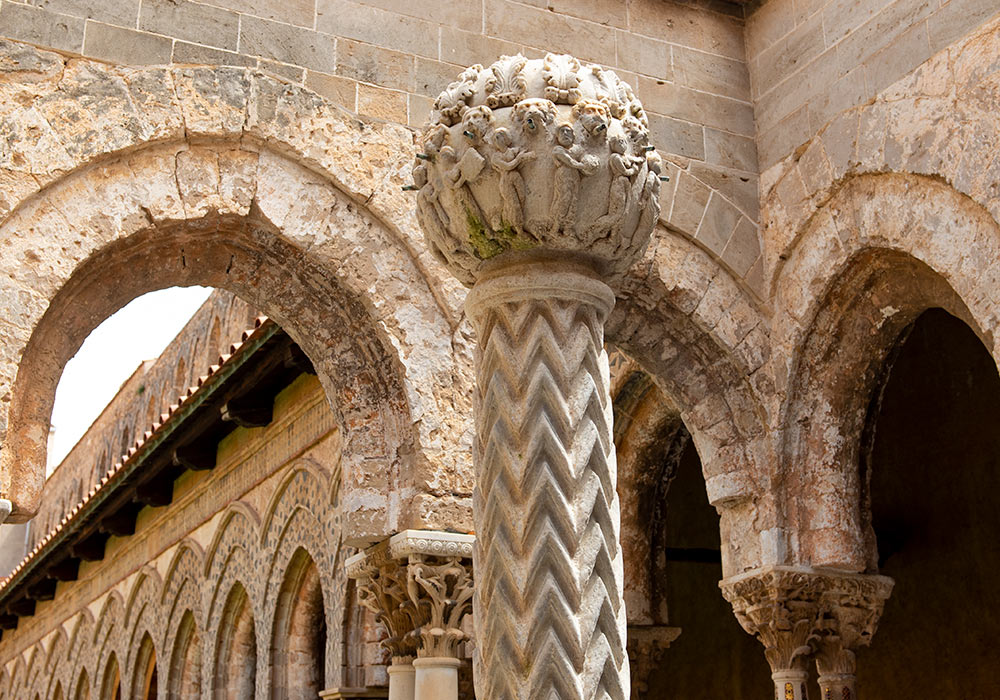 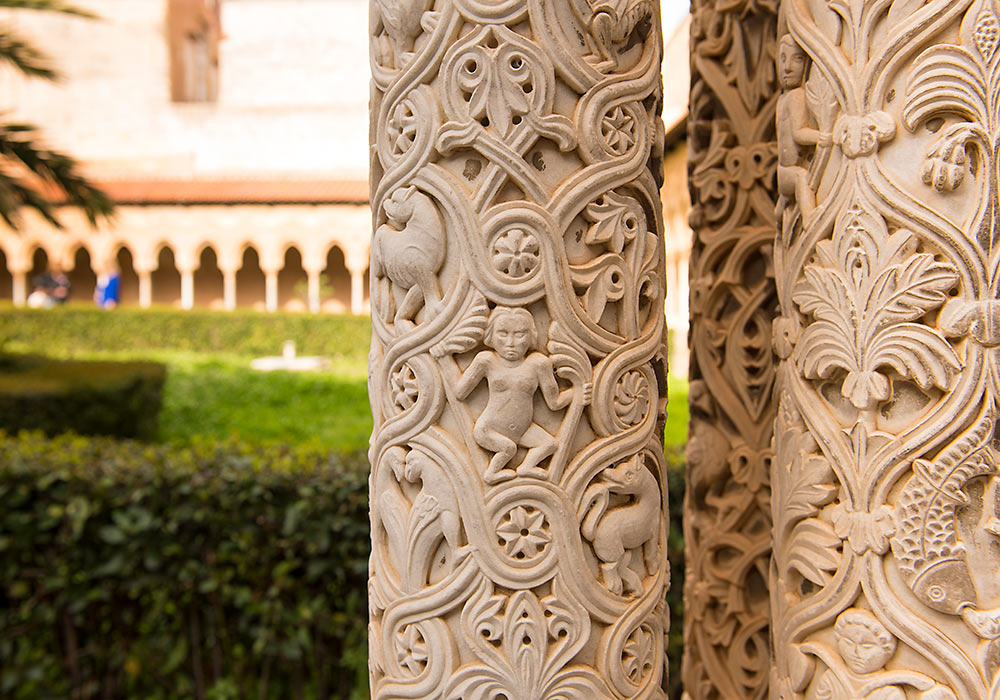 Some of the columns have beautifully carved ornaments with various motives. 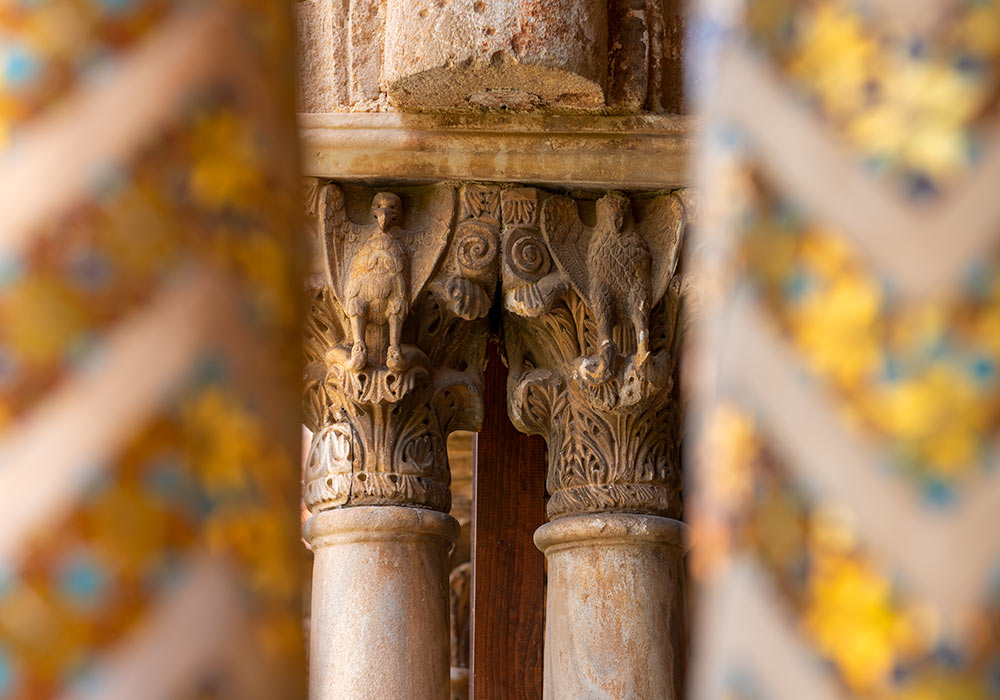 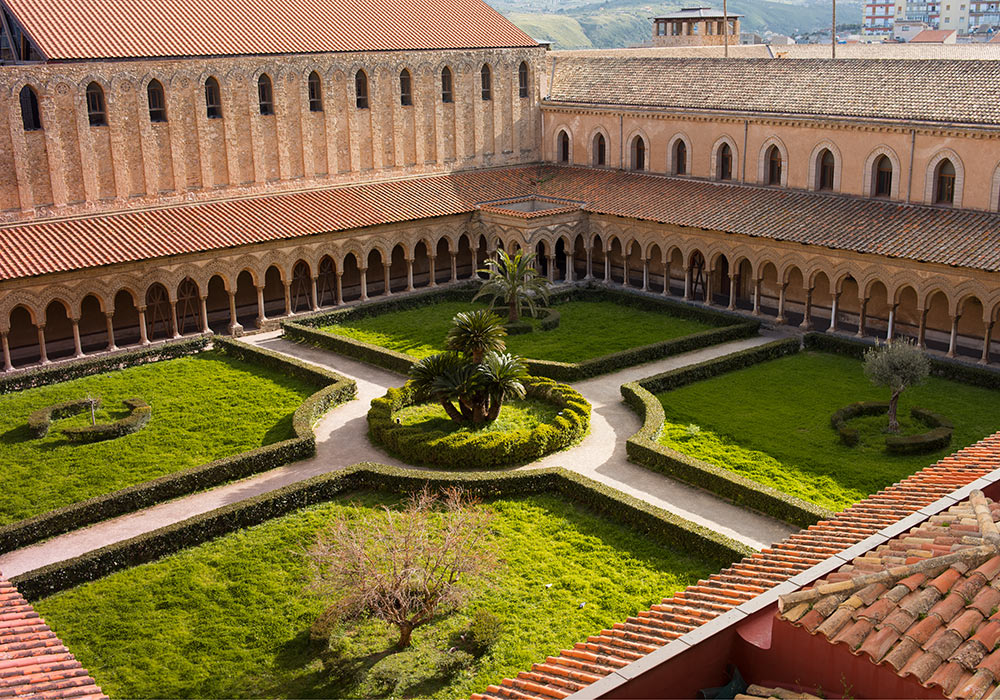 The Monreale cloister seen from the roof. The entrance to the roof is on the southwestern corner of the nave. The view of the Conca d'Oro and the coast is breathtaking from the roof, and should definitely not be missed if you have time and can manage the 180 steps. Walkways also lead around the apse of the cathedral, offering you a closer look at the mosaics that are high above the church floor.

In the garden, the monks grew fruit trees. 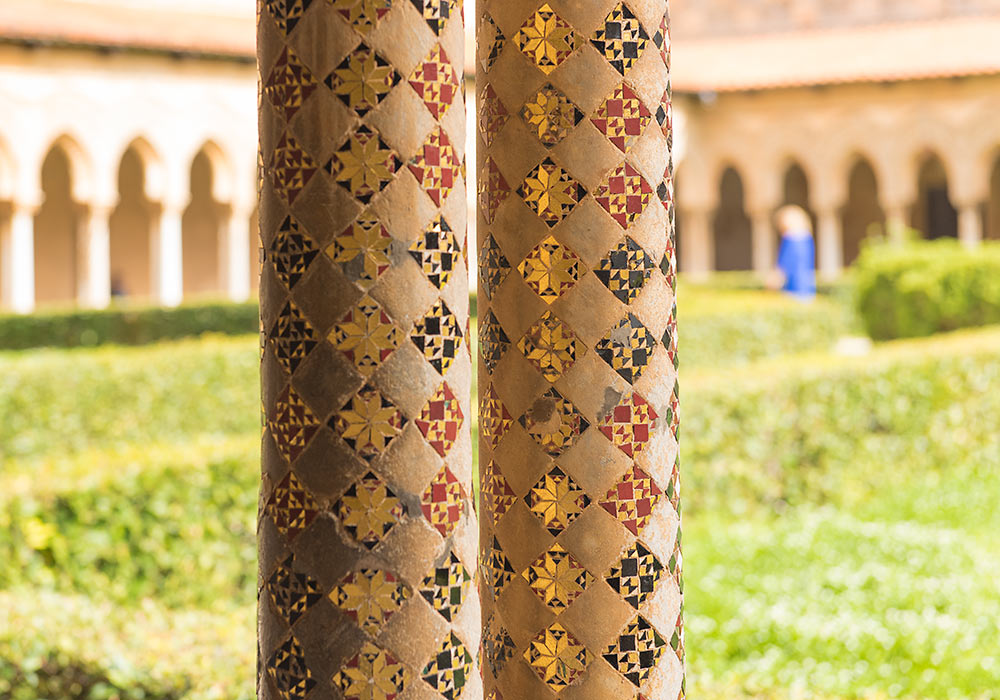 Capitals in the Benedictine Cloister, Monreale 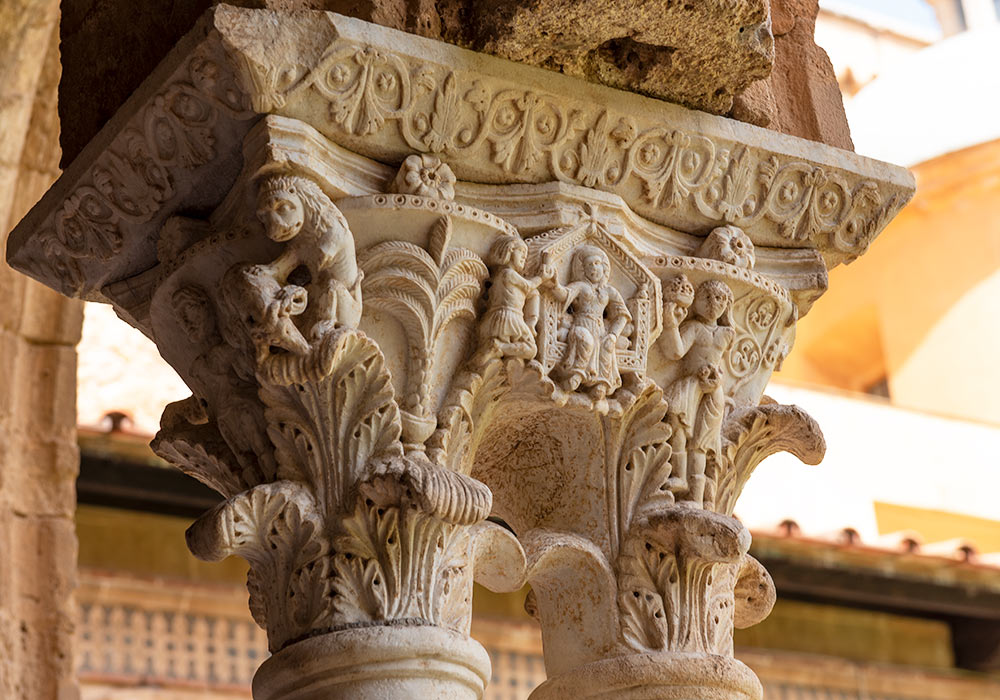 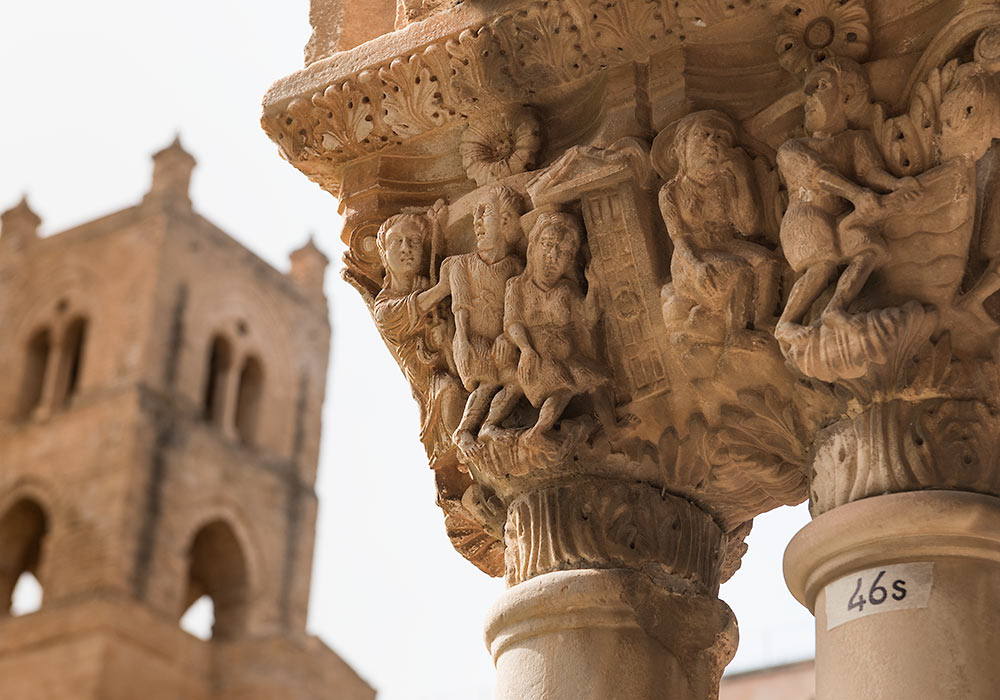 Capital at the Benedictine Cloister, Monreale. The cathedral can be seen in the background. 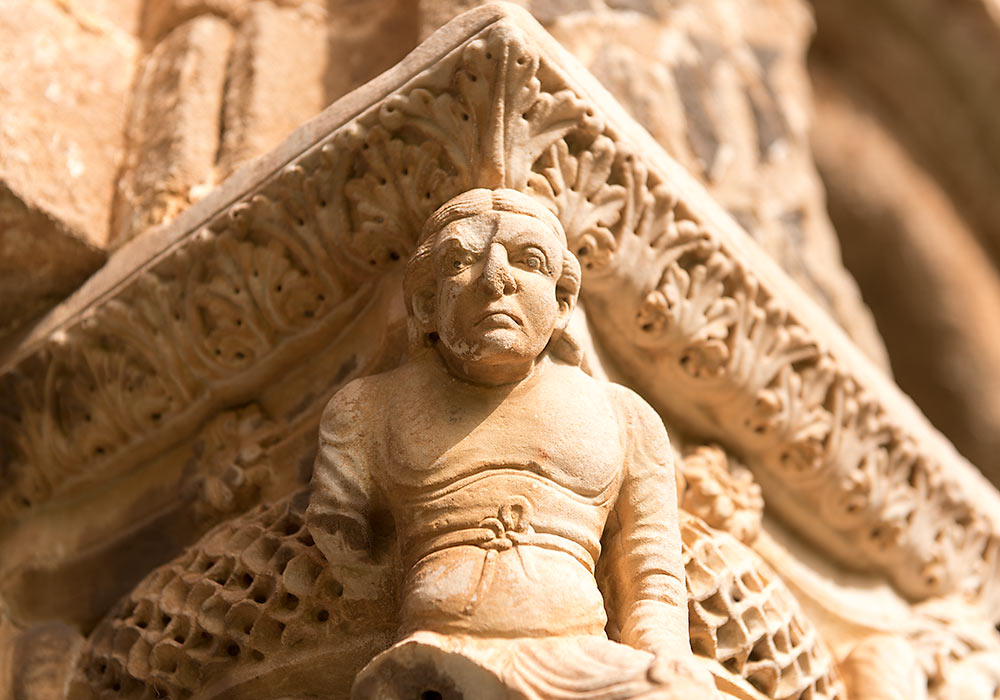 The capitals in the cloister of the abbey of Monreale were carved from white marble, but over time has acquired a thick, sandstone patina that covers them almost entirely. 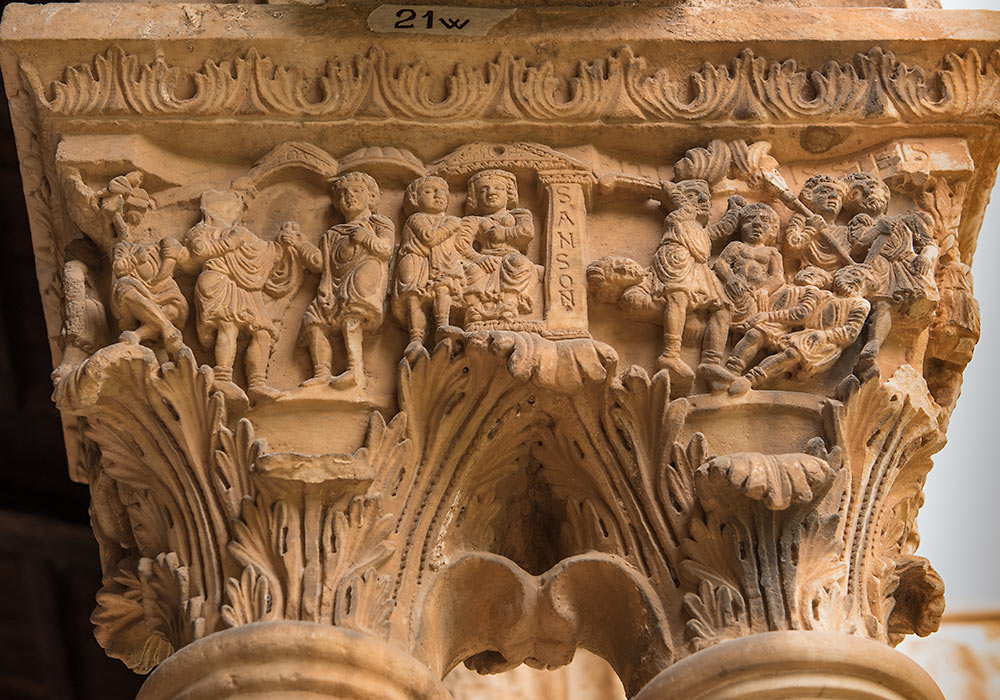 Episodes from the life of Samson constitute the central theme of this capital. The west side of the double capital combines two separate incidents: On the left is the wedding feast where Samson tells his riddle -“Out of the eater, something to eat; out of the strong, something sweet” - the answer to which is extorted from his wife. On the right Samson slaughters the Philistines, an event that he will repeat later on using the jaw bone of a ass. The name SANSON is inscribed several times on the capital. The Philistines are also designated with an inscription - FILIIS STEIS - and the east side of the capital also bears the inscribed caption: PO / NA / ANI / MA / ME / R. (Source: The Cenobium Project).

Judges 14,12-13 (King James Version) 12 And Samson said unto them, I will now put forth a riddle unto you: if ye can certainly declare it me within the seven days of the feast, and find it out, then I will give you thirty sheets and thirty change of garments: 13 But if ye cannot declare it me, then shall ye give me thirty sheets and thirty change of garments. And they said unto him, Put forth thy riddle, that we may hear it. 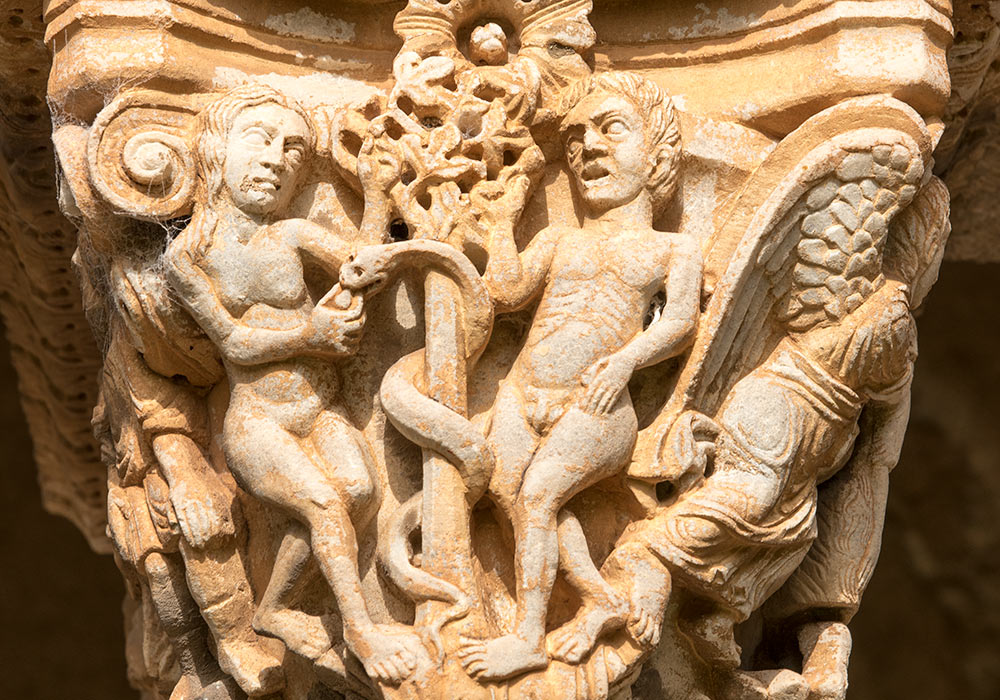 Adam and Eve are shown naked next to the Tree of Knowledge. Eve reaches for the forbidden fruit. 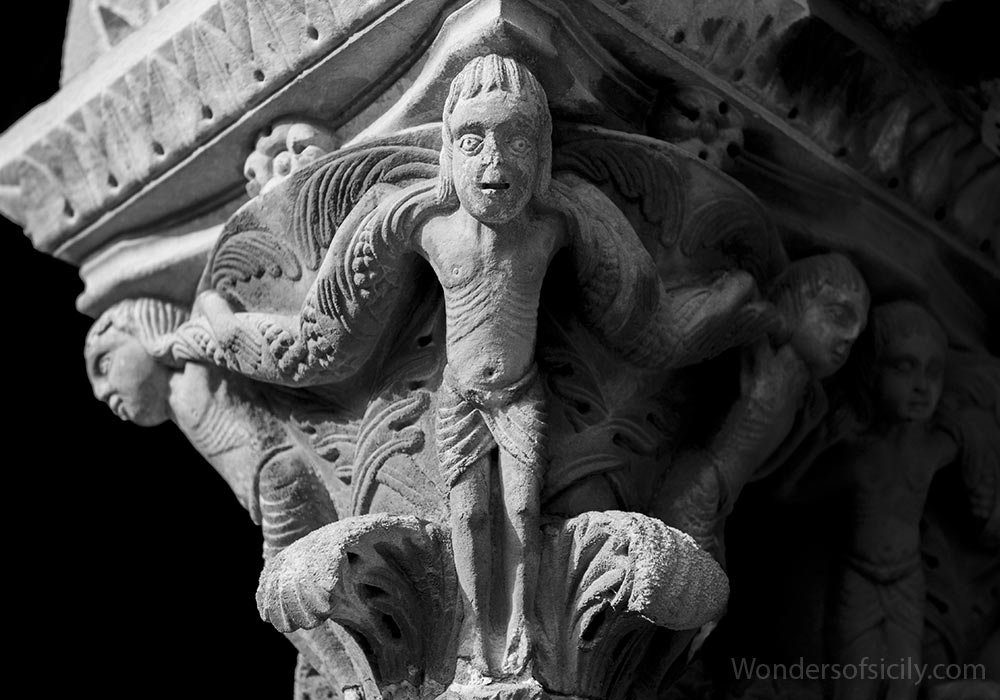 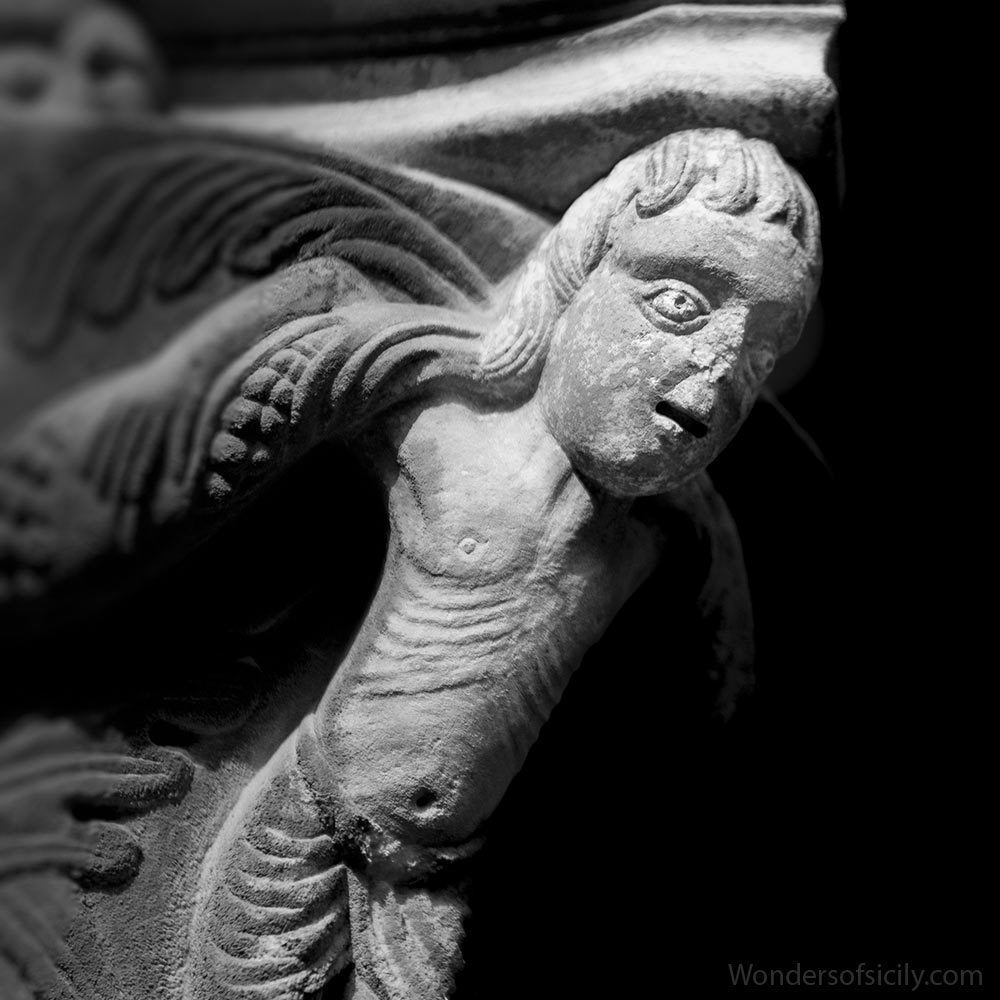 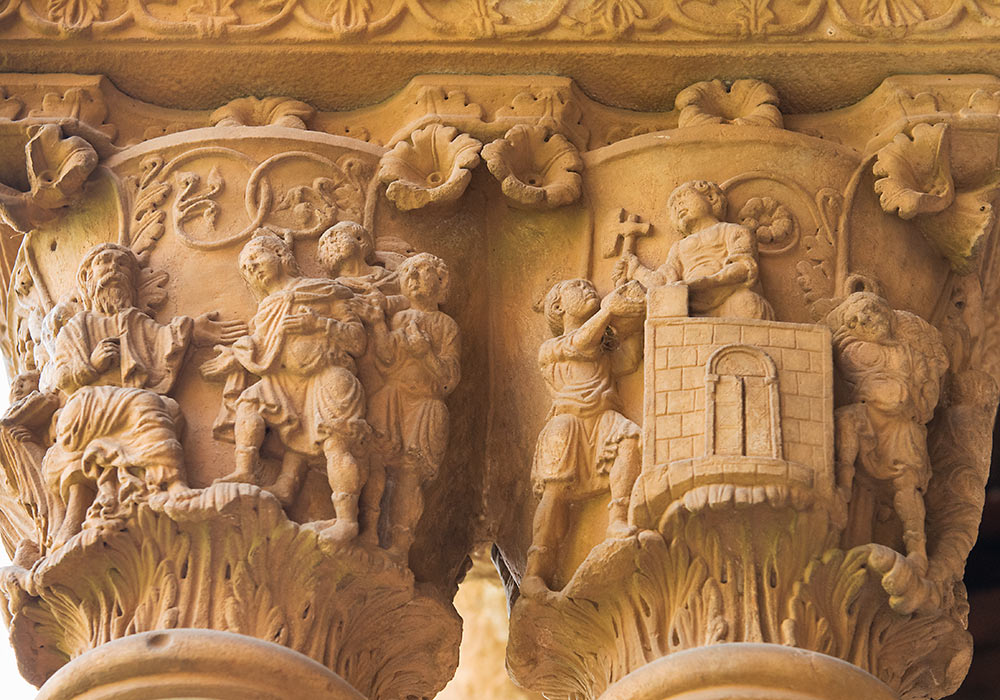 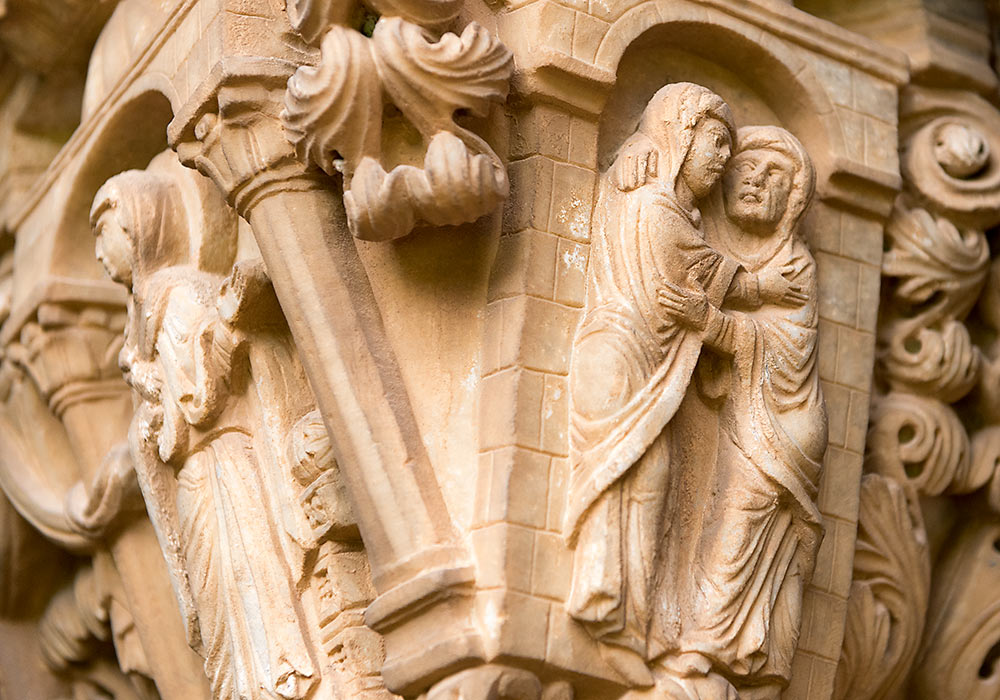 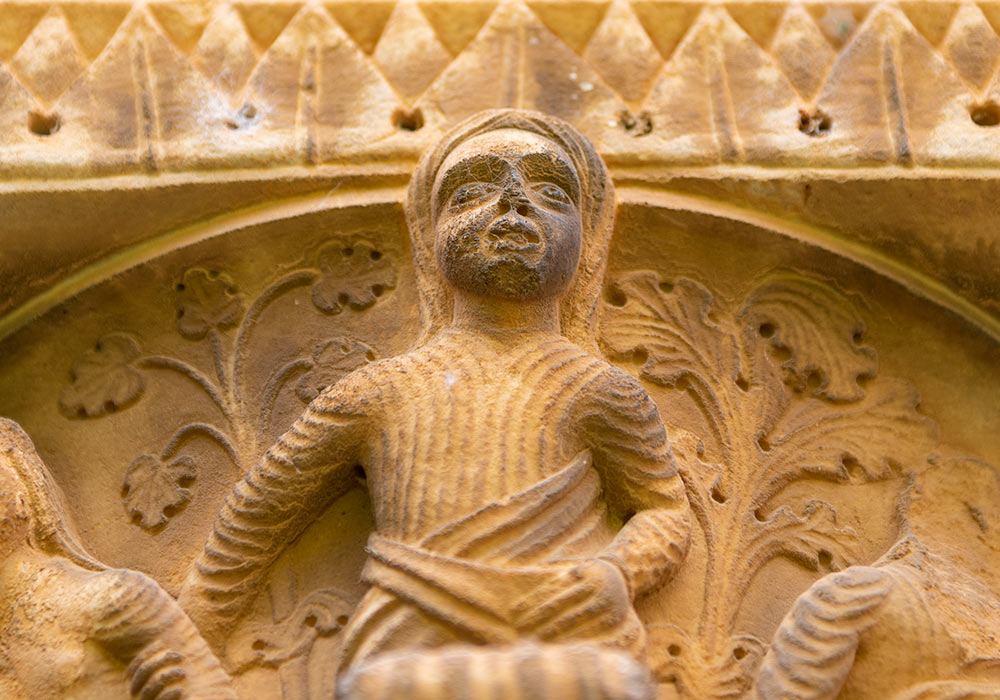 Detail on a capital. 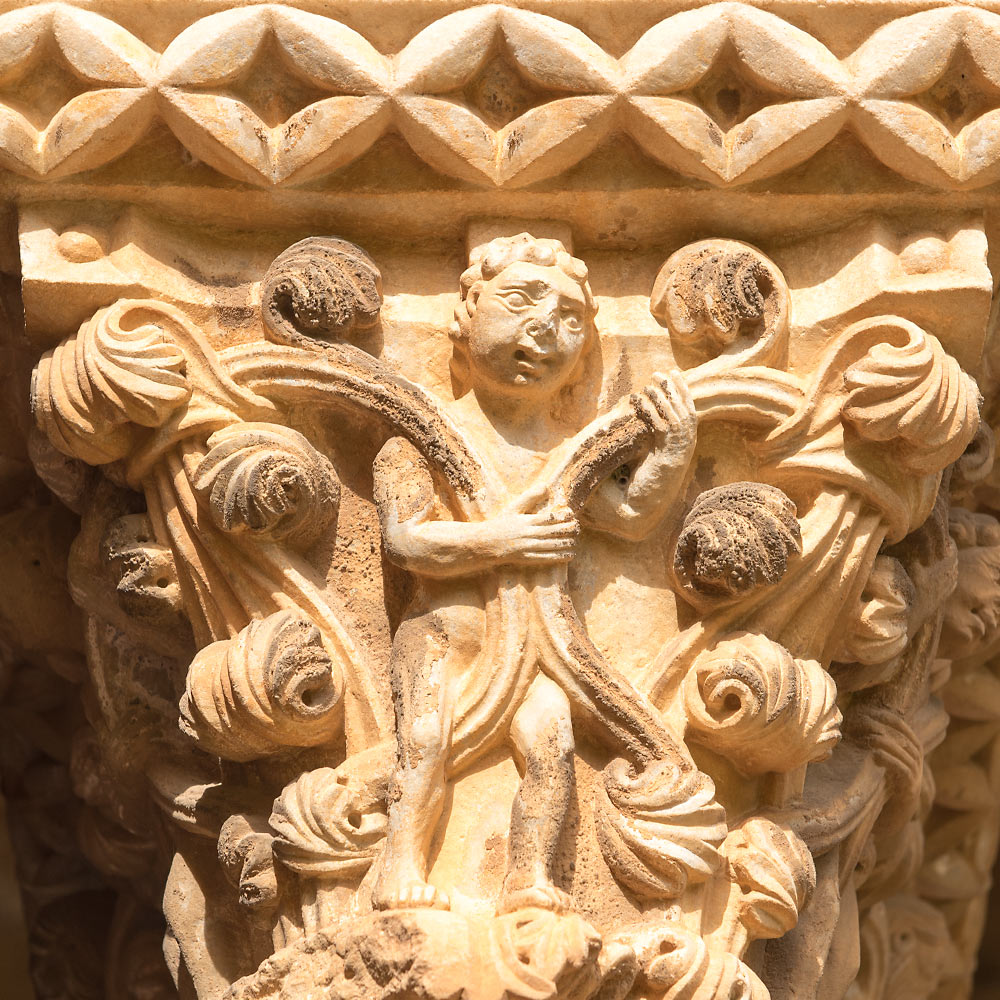 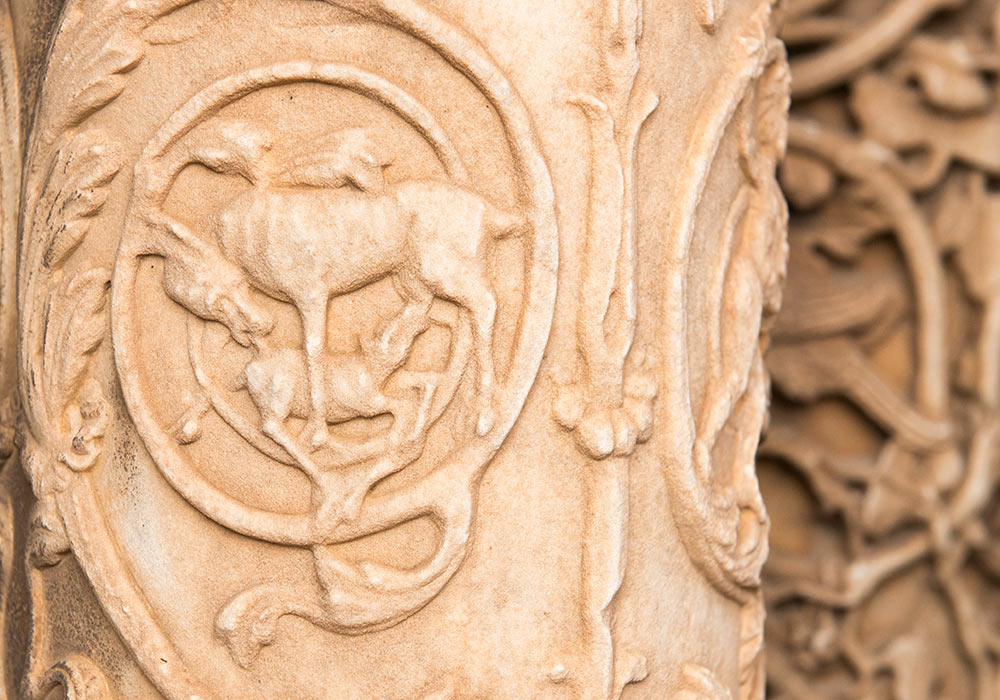 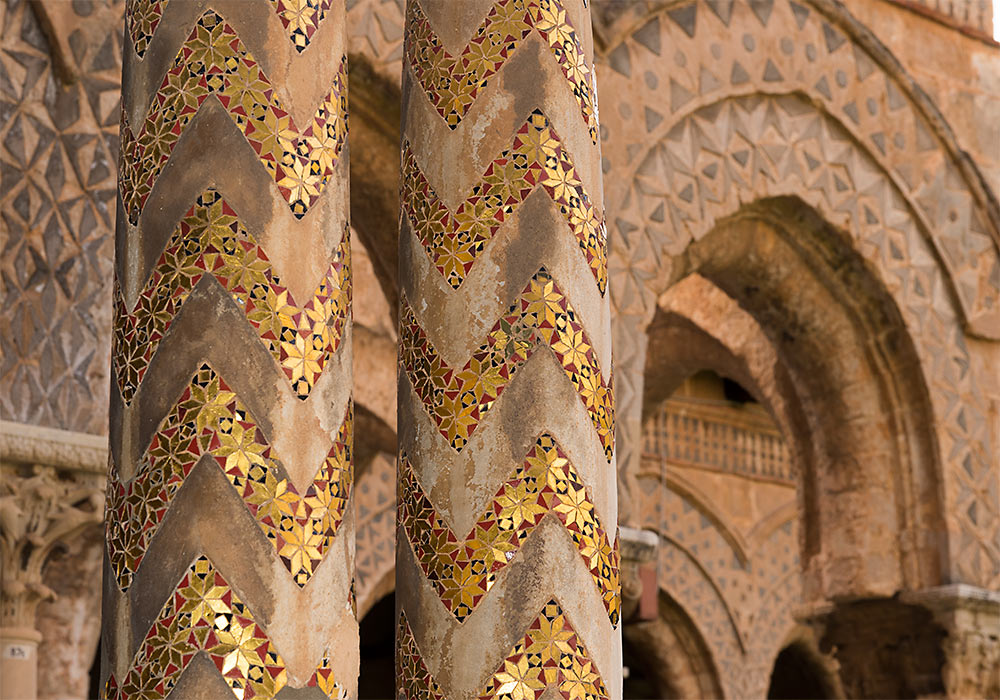 Many of the columns are richly decorated, inlaid with colored stones.

Some of the columns have beautifully carved ornaments with various motives. 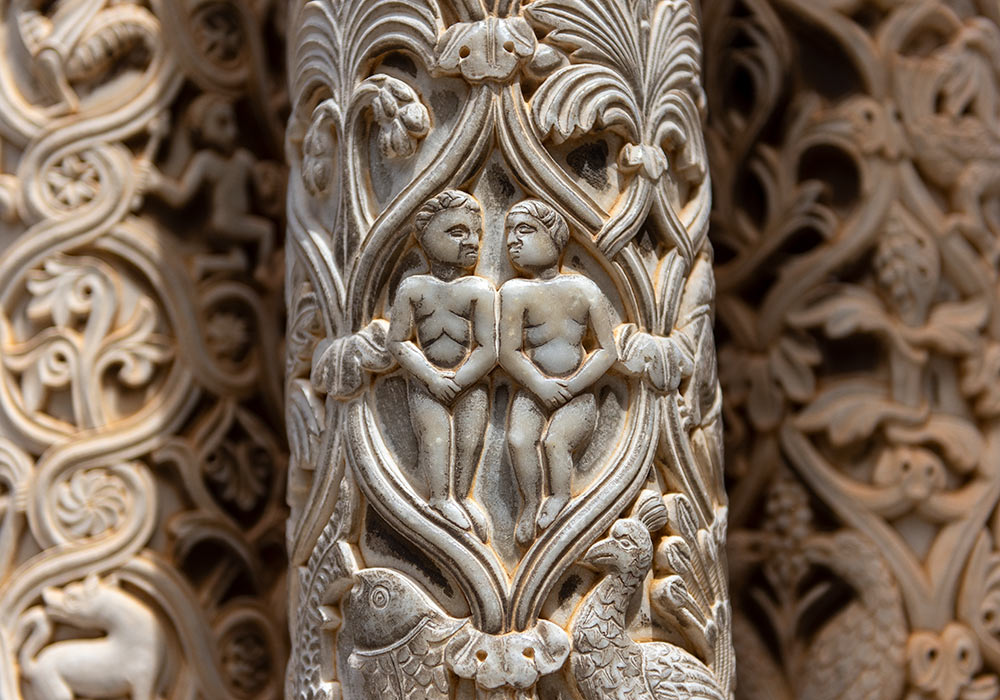 Close-up of Adam and Eve on one of the columns. 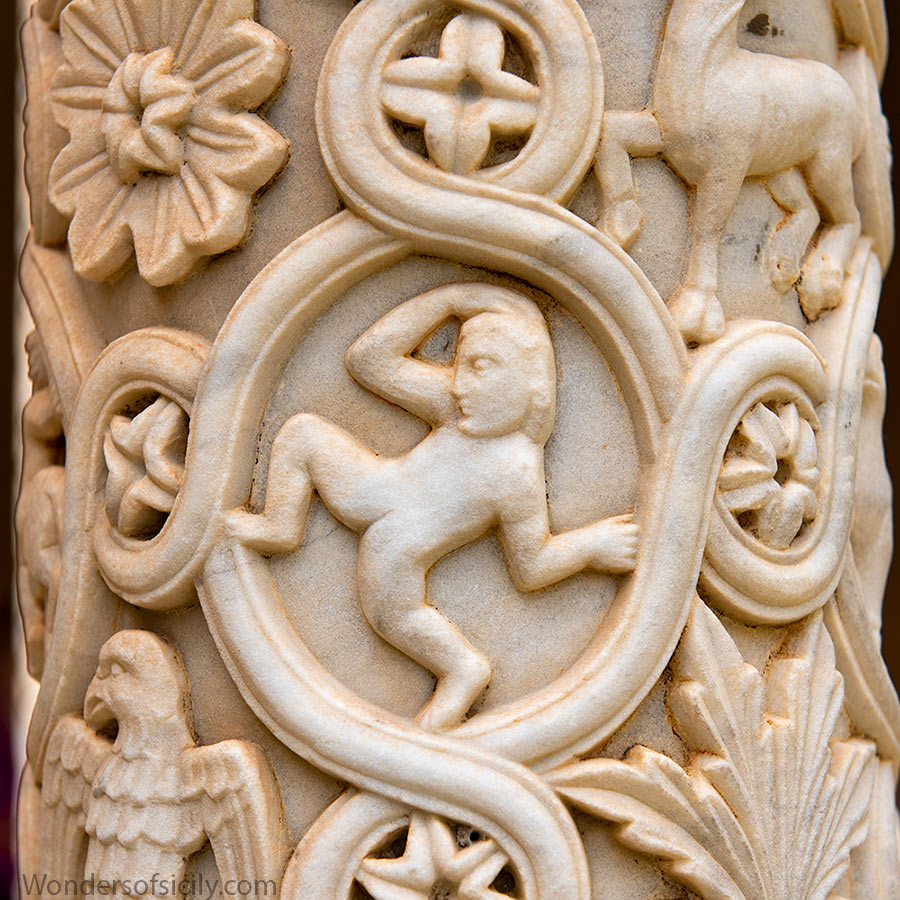 Detail on one of the columns. 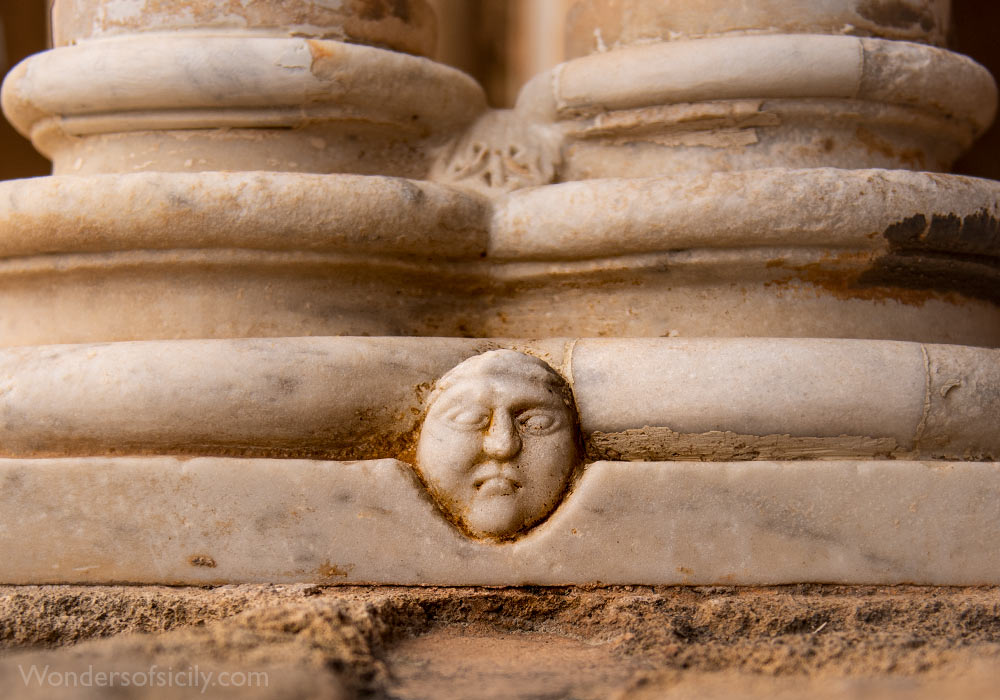 This funny face is located at the base of one of the columns.

The Cathedral in Monreale (Duomo) 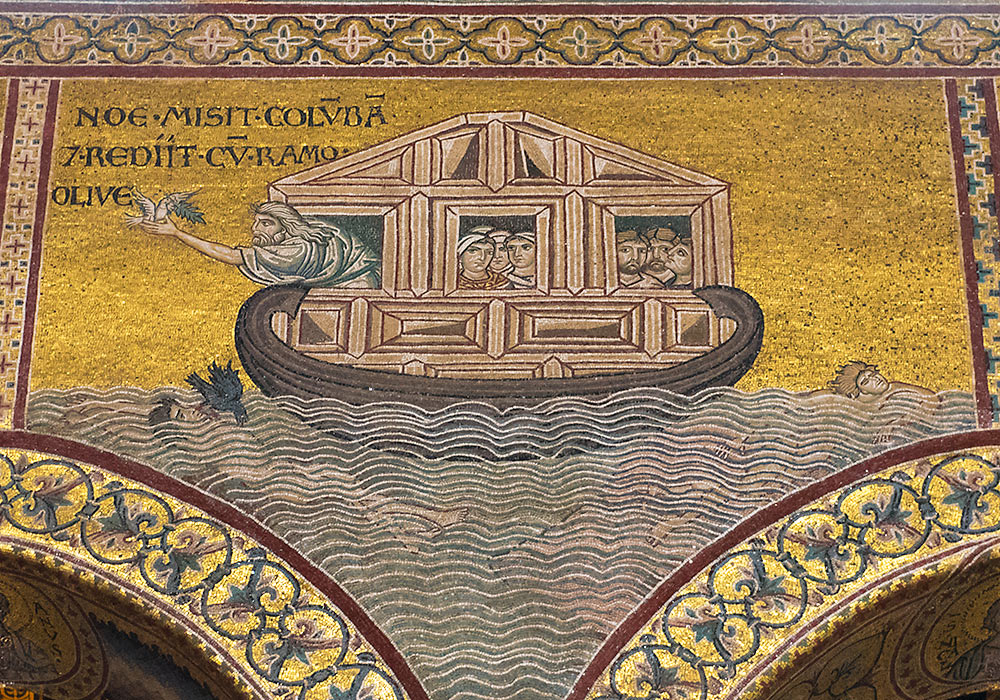 Mosaics on the south wall: Cycle of the Old Testament.

Click here to see photos of the Monreale Cathedral 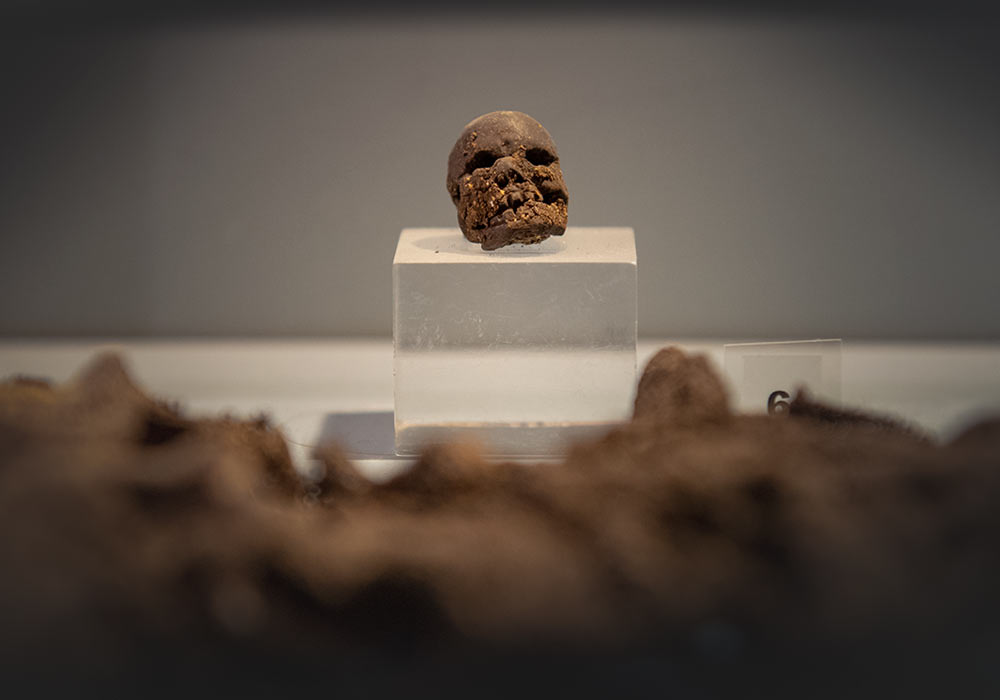 Gravegoods: This small wooden skull (c. 2 cm) was found in the folds of an undergarment. Maybe it was hung as a pendant. (In the small museum next to the cloister.)