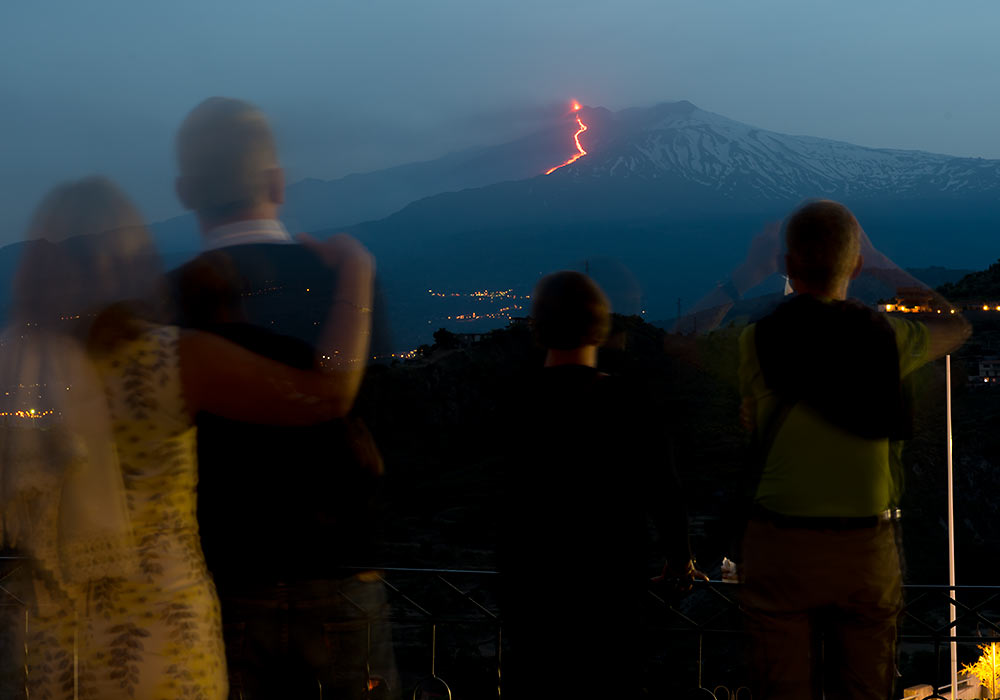 Etna erupting in May 2015. People in Taormina are watching.

In 396 BC, an eruption of Etna reportedly thwarted the Carthaginians in their attempt to advance on Siracusa during the Second Sicilian War.

A particularly violent explosive (Plinian) summit eruption occurred in 122 BC, and caused heavy tephra falls to the southeast, including the town of Catania, where many roofs collapsed.

An eruption in about 1030 AD near Monte Ilice on the lower southeast flank produced a lava flow that travelled about 10 km, reaching the sea north of Acireale; the villages of Santa Tecla and Stazzo are built on the broad delta built by this lava flow into the sea.

The lava flow reached the sea just to the north of Catania, in the area now occupied by the portion of the city named Ognina.

Rabban Bar Sauma, a Chinese traveller to the West, recorded the eruption of Etna on 18 June 1287.

The 1669 eruption, Etna's most destructive since 122 BC, started on 11 March 1669 and produced lava flows that destroyed at least 10 villages on its southern flank before reaching the city walls of the town of Catania five weeks later, on 15 April.

The eruptions in 1669 that reached Catania explained in this animation. (Sorry, only in Italian, but you can choose English translation by clicking the Settings wheel on the video)

A large lava flow from an eruption in 1928 led to the destruction of a population centre for the first time since the 1669 eruption.

In 1971, lava buried the Etna Observatory (built in the late 19th century), destroyed the first generation of the Etna cable-car, and seriously threatened several small villages on Etna's east flank.

In March 1981, the town of Randazzo on the northwestern flank of Etna narrowly escaped destruction by unusually fast-moving lava flows.

The 1991–1993 eruption saw the town of Zafferana threatened by a lava flow, but successful diversion efforts saved the town with the loss of only one building a few hundred metres from the town's margin. Initially, such efforts consisted of the construction of earth barriers built perpendicularly to the flow direction; it was hoped that the eruption would stop before the artificial basins created behind the barriers would be completely filled. Instead, the eruption continued, and lava surmounted the barriers, heading directly toward Zafferana. Engineers then decided to use explosives near the source of the lava flow, to disrupt a very efficient lava tube system through which the lava travelled for up to 7 km (4 mi) without losing significant heat or fluidity. The main explosion on 23 May 1992 destroyed the tube and forced the lava into a new artificial channel, far from Zafferana, and it would have taken months to re-establish a long lava tube. Shortly after the blasting, the rate of lava emission dropped, and during the remainder of the eruption (until 30 March 1993) the lava never advanced close to the town again.

Following six years (1995–2001) of unusually intense activity at the four summit craters of Etna, the volcano produced its first flank eruption since 1991–1993 in July–August 2001. This eruption involved activity from seven distinct eruptive fissures mostly on the south slope of the volcano.

In 2002–2003, an eruption threw up a huge column of ash that could easily be seen from space and fell as far away as Libya, 600 km south across the Mediterranean Sea. Seismic activity in this eruption caused the eastern flanks of the volcano to slip by up to two metres, and many houses on the flanks of the volcano experienced structural damage. The eruption also completely destroyed the tourist station Piano Provenzana, on the northeastern flank of the volcano, and part of the tourist station "Etna Sud" around the Rifugio Sapienza on the south flank. Footage from the eruptions was recorded by Lucasfilm and integrated into the landscape of the planet Mustafar in the 2005 film Star Wars: Episode III – Revenge of the Sith.

On 4 September 2007, a major episode of lava fountaining occurred from the new vent on the east side of the Southeast Crater, also producing a plume of ash and scoriae which fell over the east flank of the volcano. A lava flow travelled about 4.5 km into the uninhabited Valle del Bove. This eruption was visible far into the plains of Sicily.

An eruption on the morning of 13 May 2008, immediately to the east of Etna's summit craters was accompanied by a swarm of more than 200 earthquakes and significant ground deformation in the summit area. The eruption continued at a slowly diminishing rate for 417 days, until 6 July 2009, making this the longest flank eruption of Etna since the 1991–1993 eruption that lasted 473 days. Lava flows advanced 6.5 km during the first few days of this eruption but thereafter stagnated at many minor distances from the vents; during the last months of the eruption lava rarely advanced more than 1 km downslope.

Through January 2011 to February 2012, the summit craters of Etna were the site of intense activity. Frequent eruptions and ash columns forced the authorities to shut down the Catania airport on several occasions.

An eruption on 16 March 2017 injured 10 people, including a BBC News television crew, after magma exploded upon contact with snow.

An eruption on 24 December 2018, following a dyke intrusion at shallow depth, spewed ash into the air, forcing the closure of airspace around Mount Etna. Two days later, a magnitude 4.9 earthquake shook the nearby city of Catania, damaging buildings and injuring four people.

(Largely based on the Wikipedia article about Mount Etna) 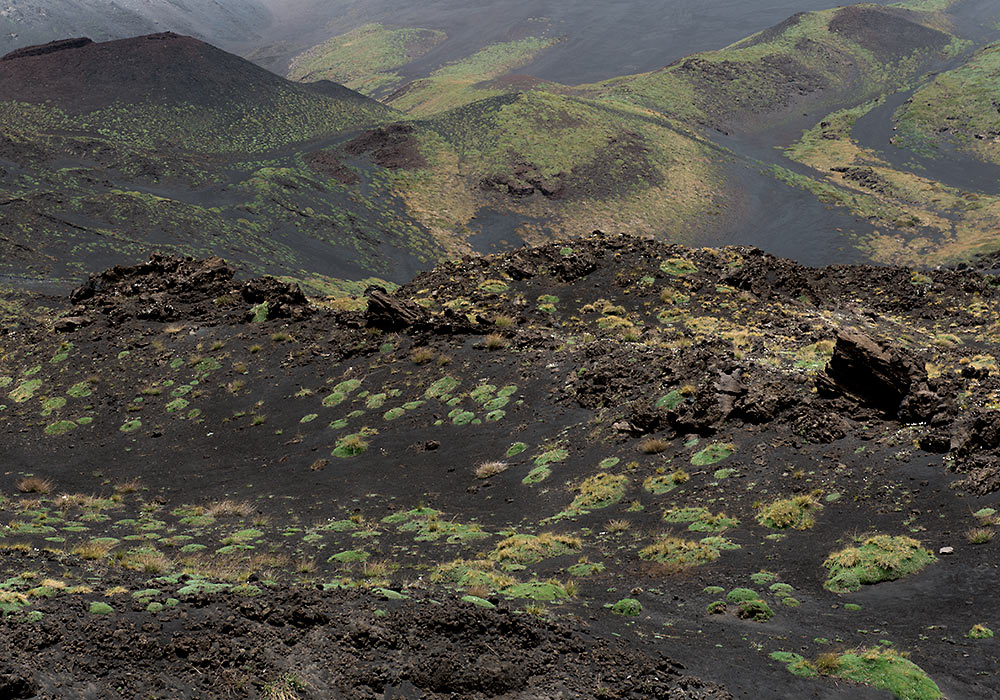 Signs of vegetation as I was driving up Mount Etna. 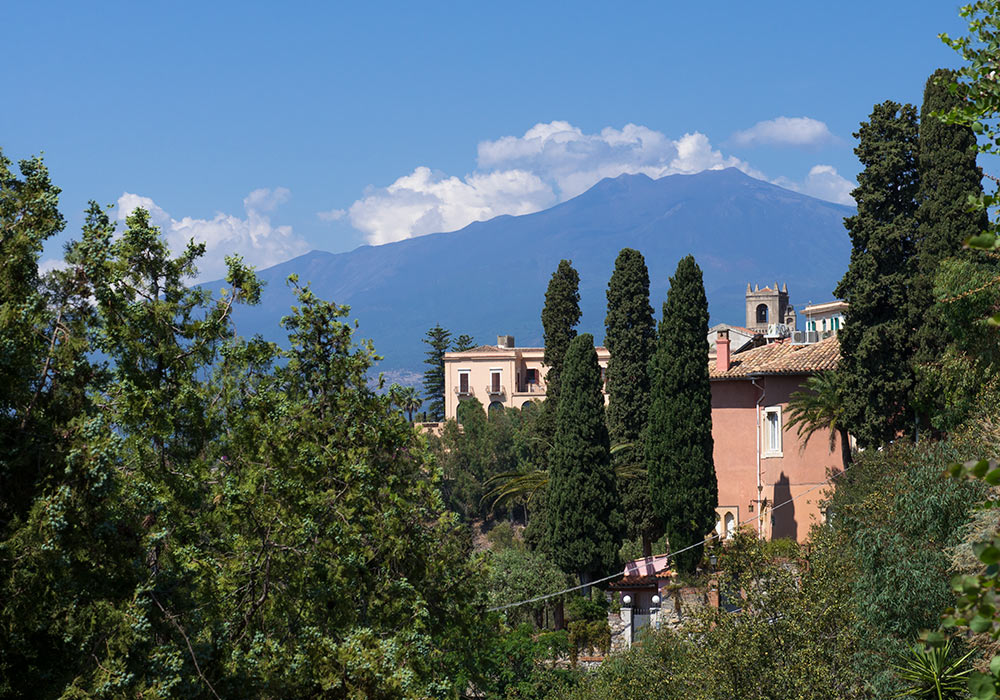 Mount Etna is one of the most active volcanoes in the world. The volcanoe can be seen from large parts of Sicily. This view is from Taormina. 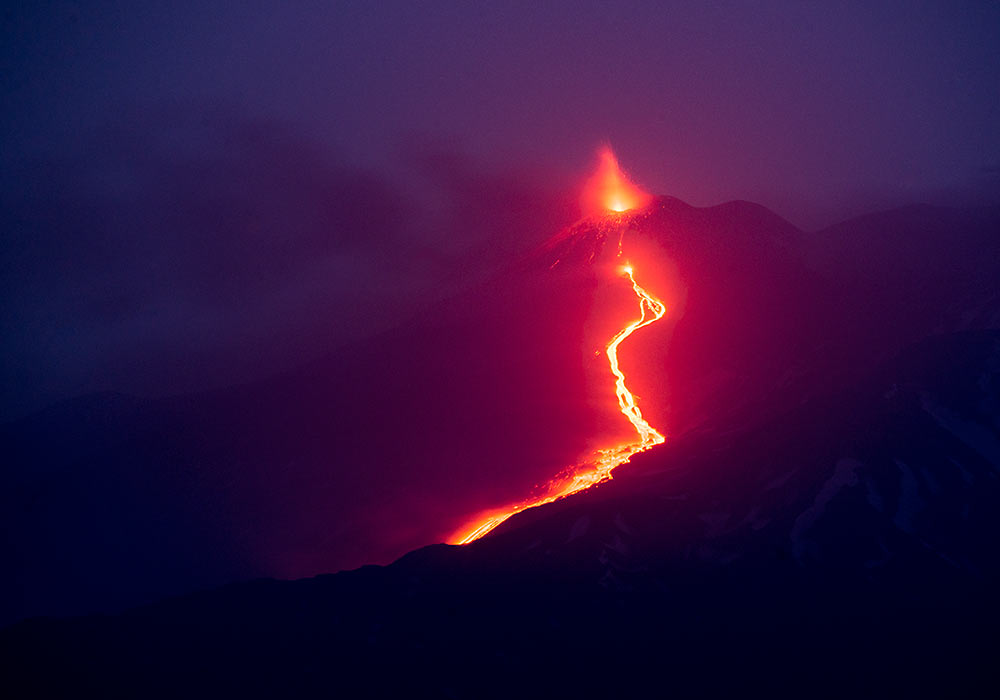 Etna erupting in May 2015. View from Taormina. 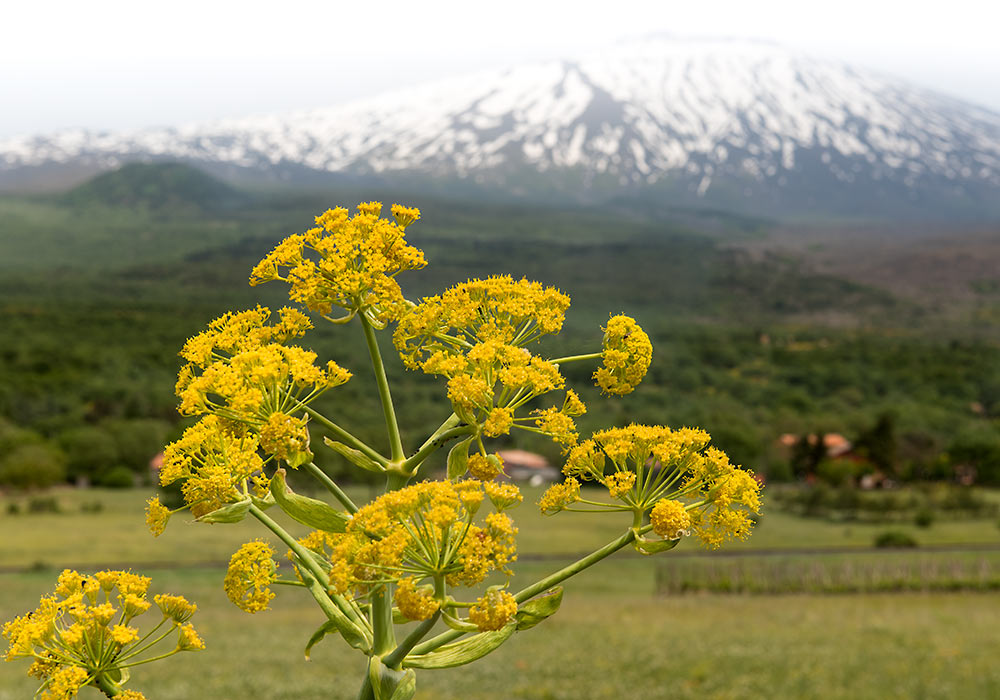 The Italian chef Giorgio Locatelli tells of his soft spot for Sicily: "Mount Etna, one of the most active volcanoes in the world, is also one of the most beautiful areas of Sicily. You can take the cable car up to 2,500m and then walk to the crater. Make sure you wear warm clothes, even in summer. The view from the top is unbelievable.
Read more in The Guardian 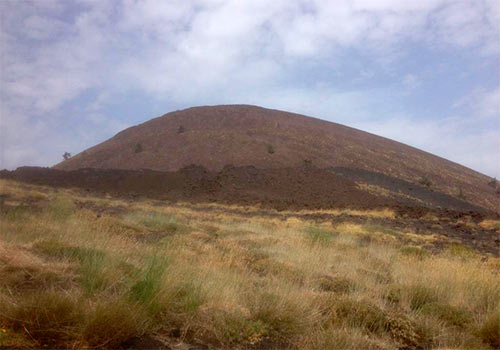 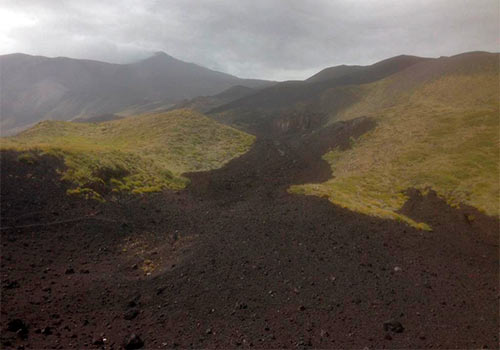 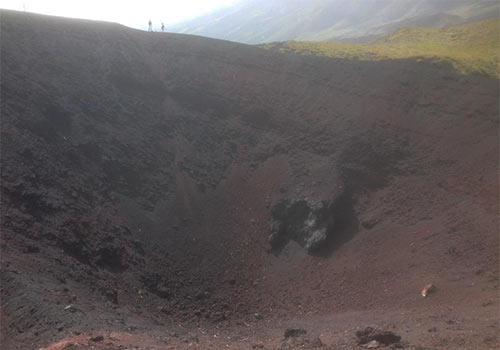 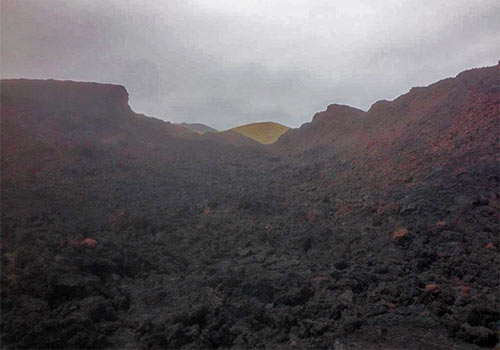