Agrigento - the Valley of the Temples 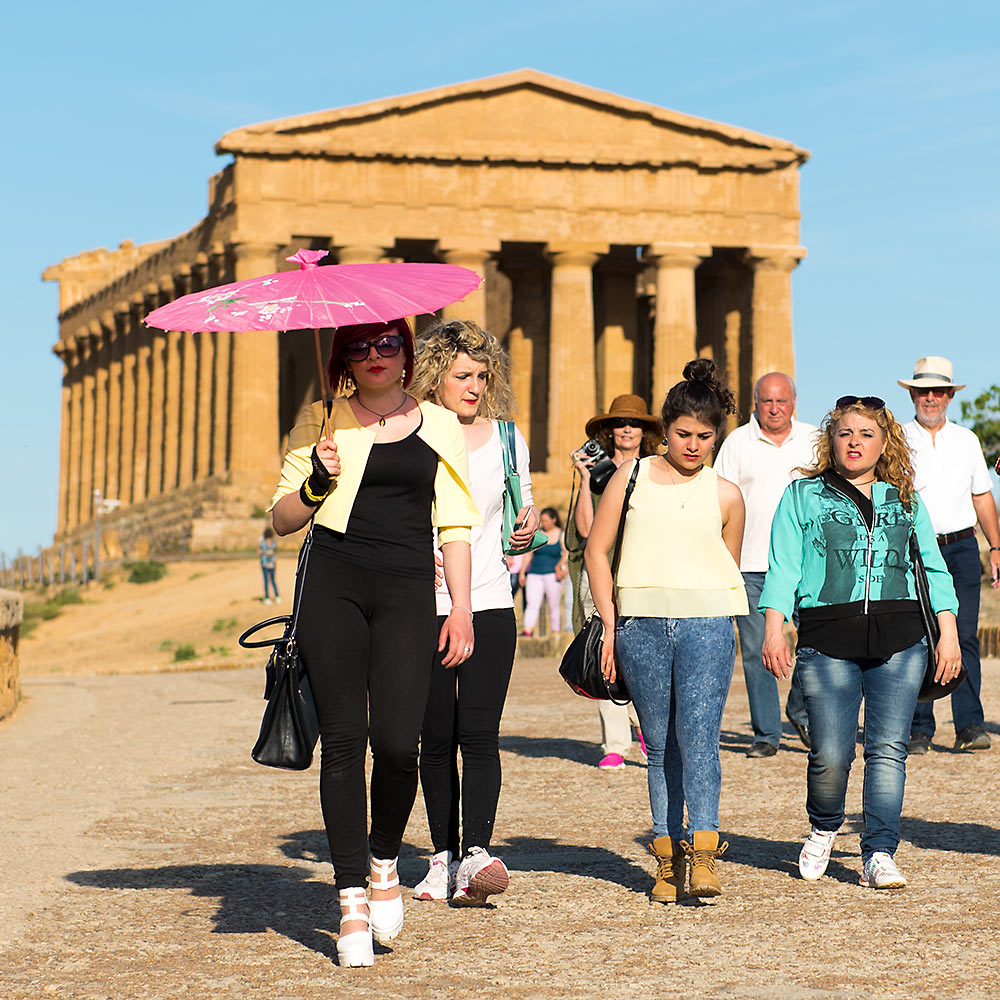 The Valley of the Temples, Agrigento. In the background: The Temple of Concord. 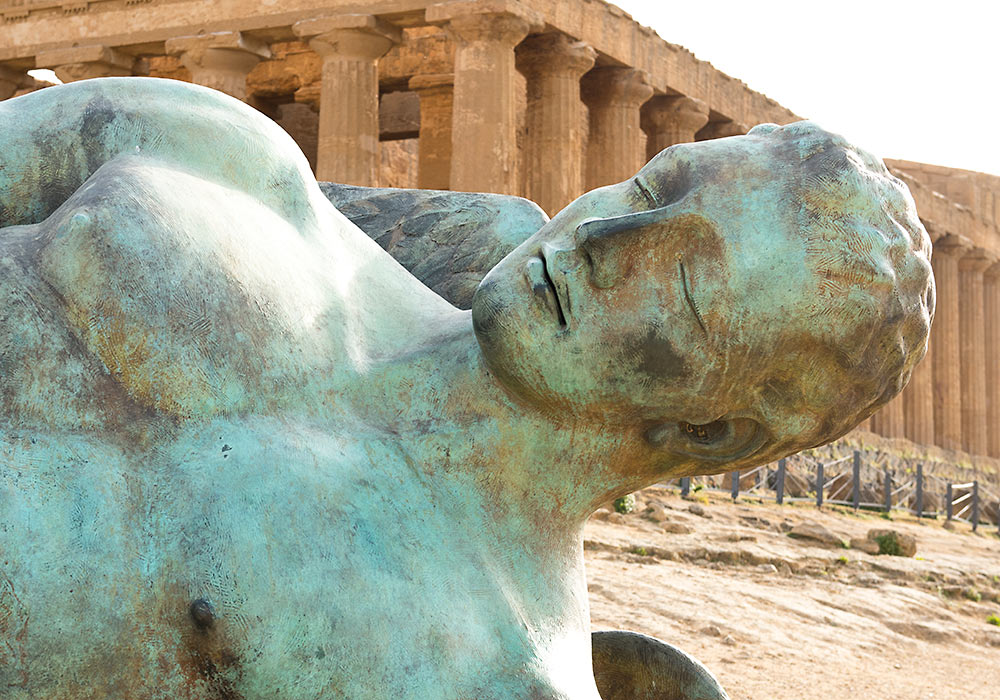 The beautiful bronze statue depicting the fallen Icarus, who flew too close to the sun. 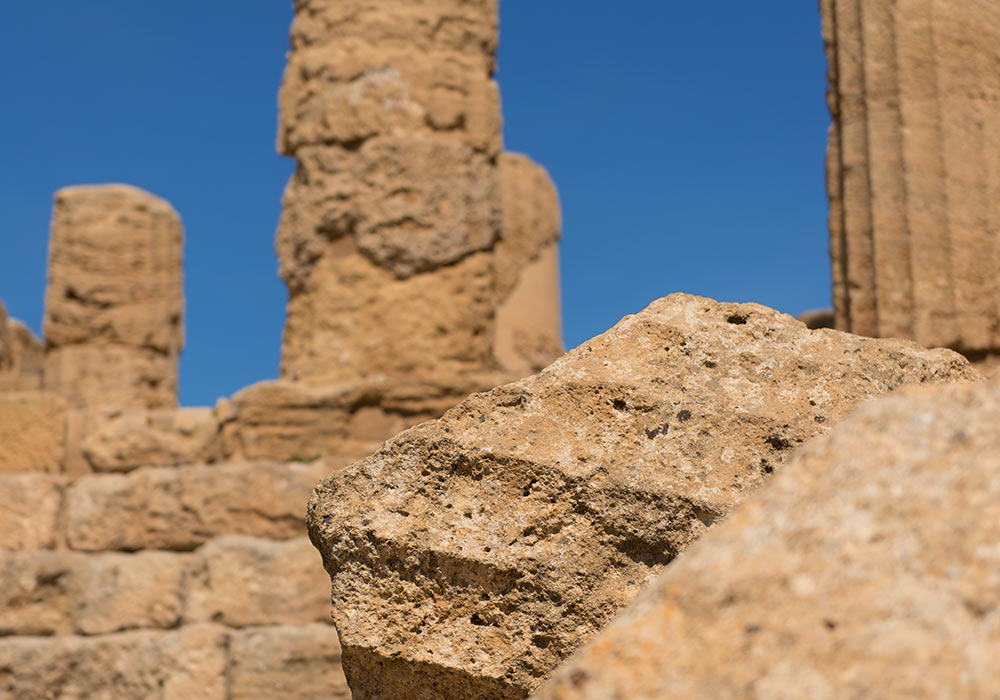 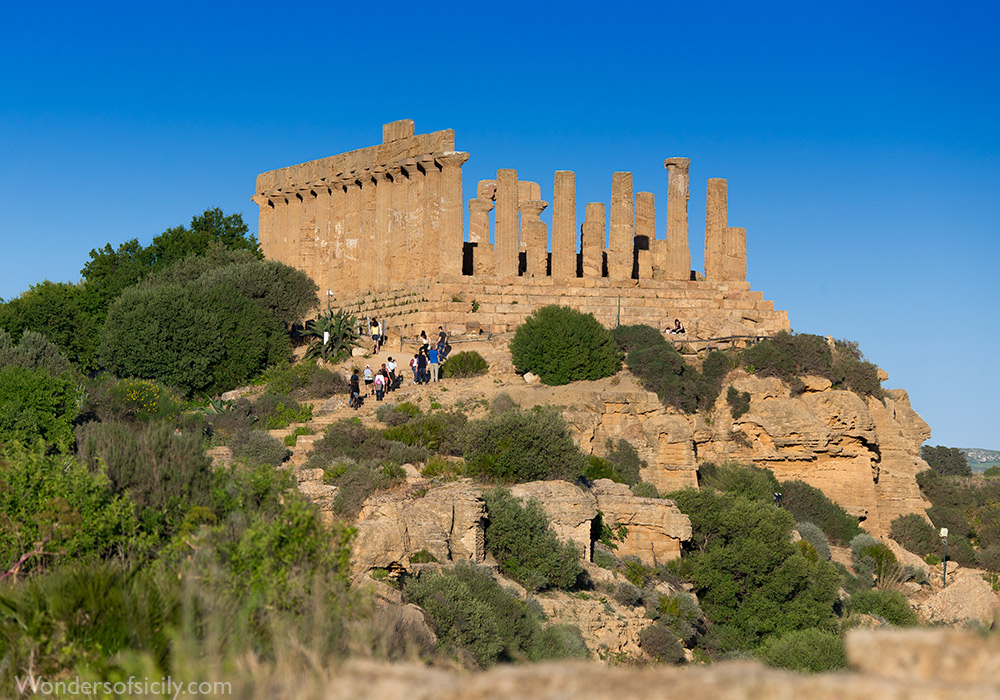 The Defensive Wall around Akragas

In Italian, but you can turn on auto translated subtitles (CC) and choose your language in the Settings (the wheel). 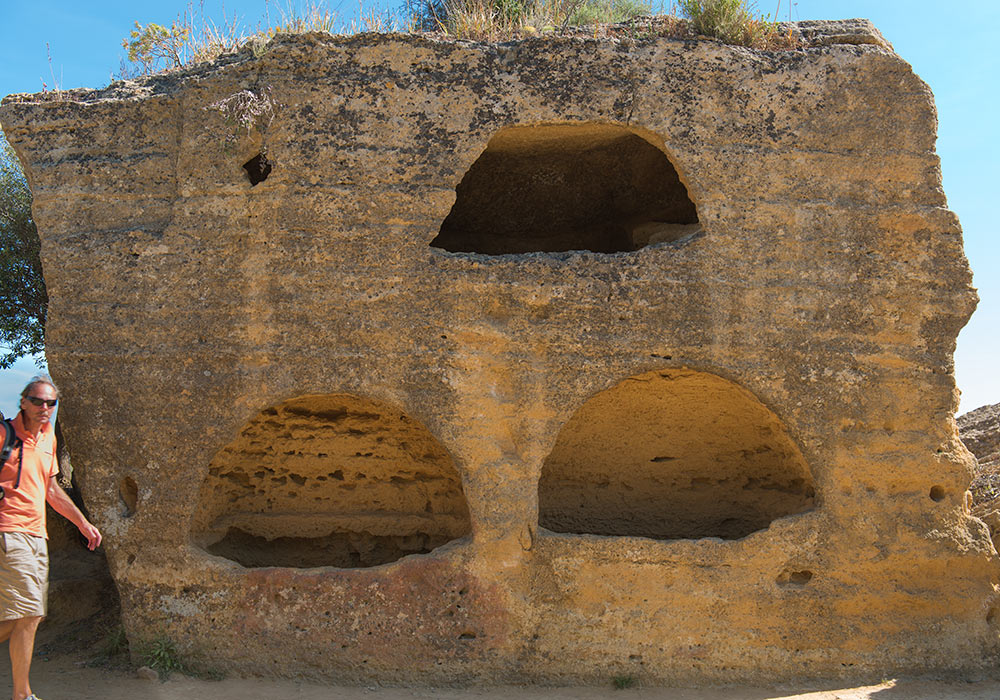 The cliff-line served as a natural defensive wall during the Greek period. The cavities in this "wall" (arcosolia, singular: arcosolium) characterized by an a curved upper surface are tombs made between the 4th and the 7th century AD.

An arcosolium is an arched recess used as a place of entombment. The word is from Latin arcus, "arch", and solium, "throne" (literally: "place of state") or post-classical "sarcophagus". Early arcosolia were carved out of the living rock in catacombs. In the very earliest of these, the arched recess was cut to ground level. Then a low wall would be built in the front, leaving a trough (the cubiculum, "chamber") in which to place the body. A flat stone slab would then cover the chamber containing the body, thus sealing it. The stone slab occasionally also served as an altar, especially for Christians. who celebrated Mass on them. In the later arcosolia, the arched recess was carved out to about waist height. Then the masons cut downwards to make the chamber into which the corpse would be placed. In effect, the trough was then a sarcophagus with living rock on five of its six faces. As before, a flat stone slab would then seal the cubiculum. From the 13th century onwards, and continuing into the Renaissance, arcosolia were built above ground, particularly in the walls of churches. In these post-Roman era recesses, which were built of brick and marble, the sarcophagi are usually separate from the arch. Source: Wikipedia 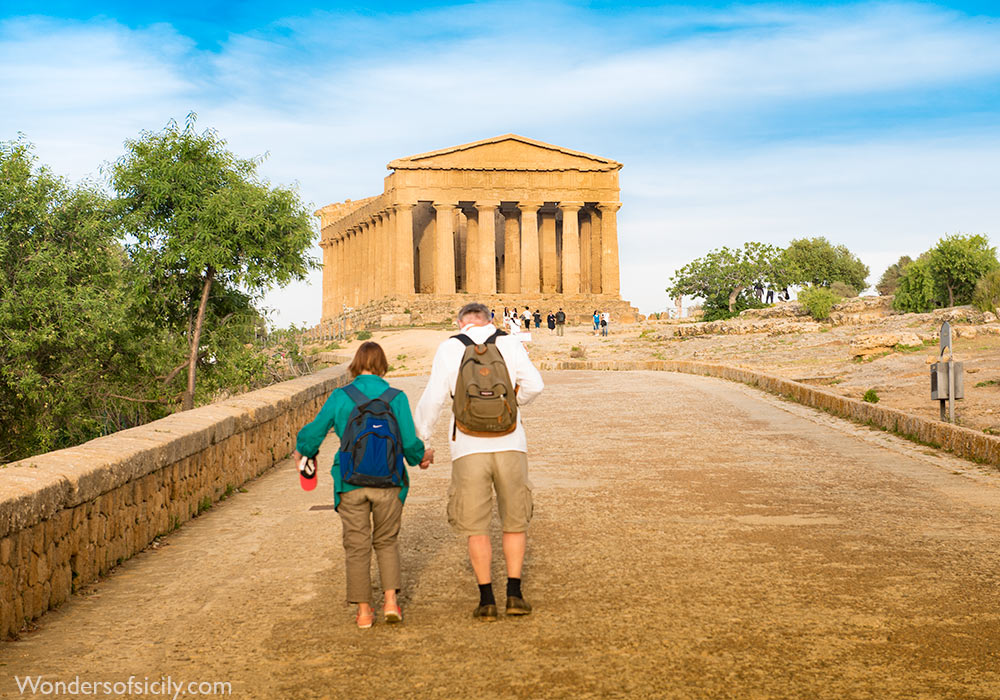 Via Sacra. Temple of Concord. 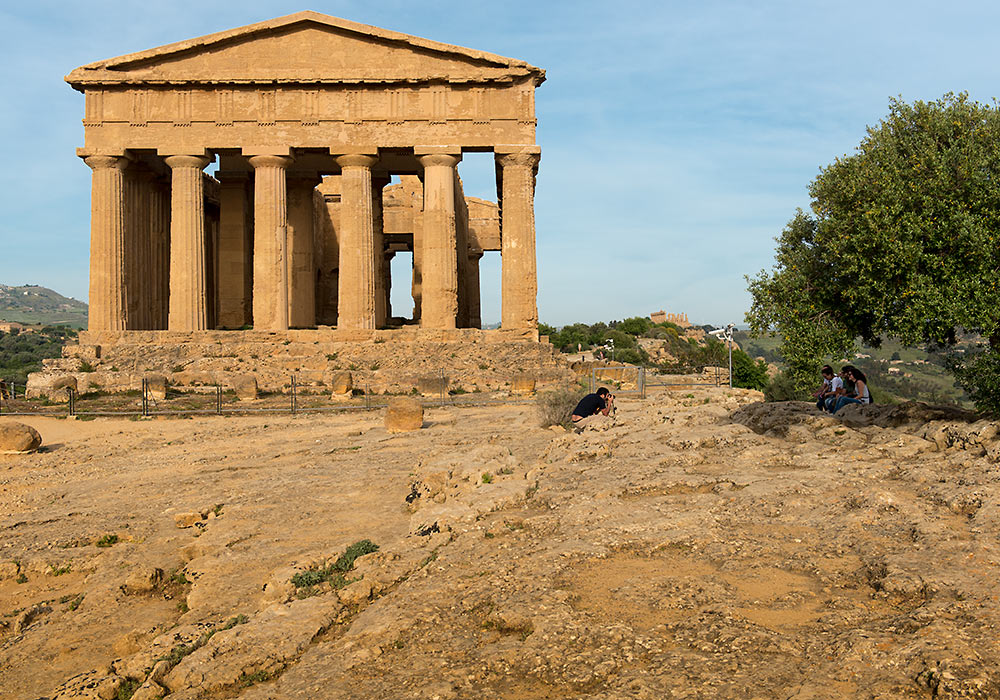 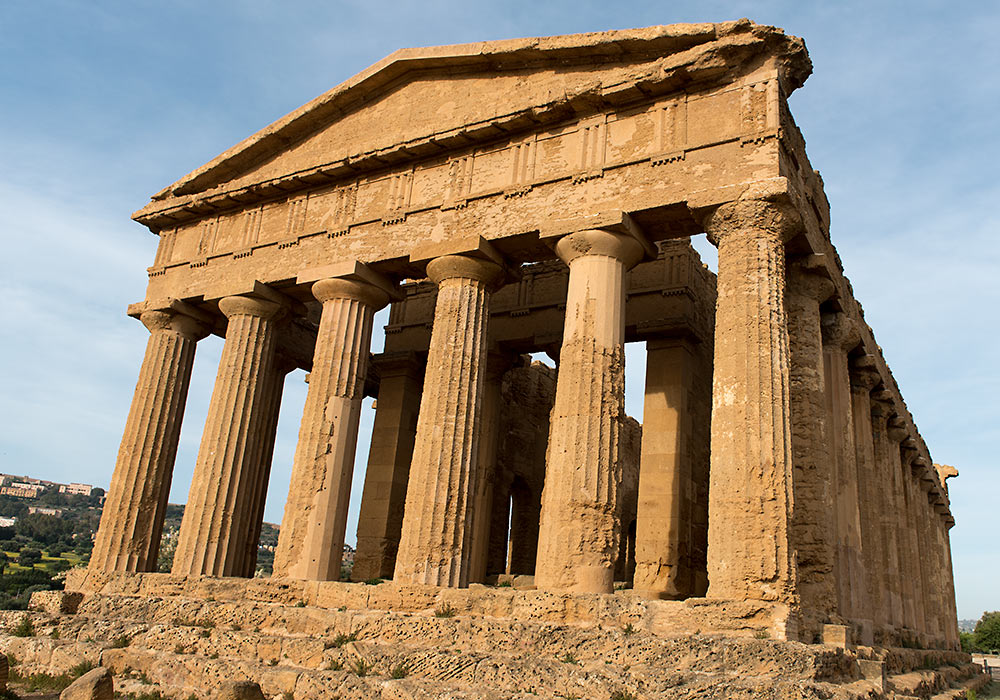 The Temple of Concord is one of the best preserved temples of antiquity, most likely because it served as a church during the Middle Ages. 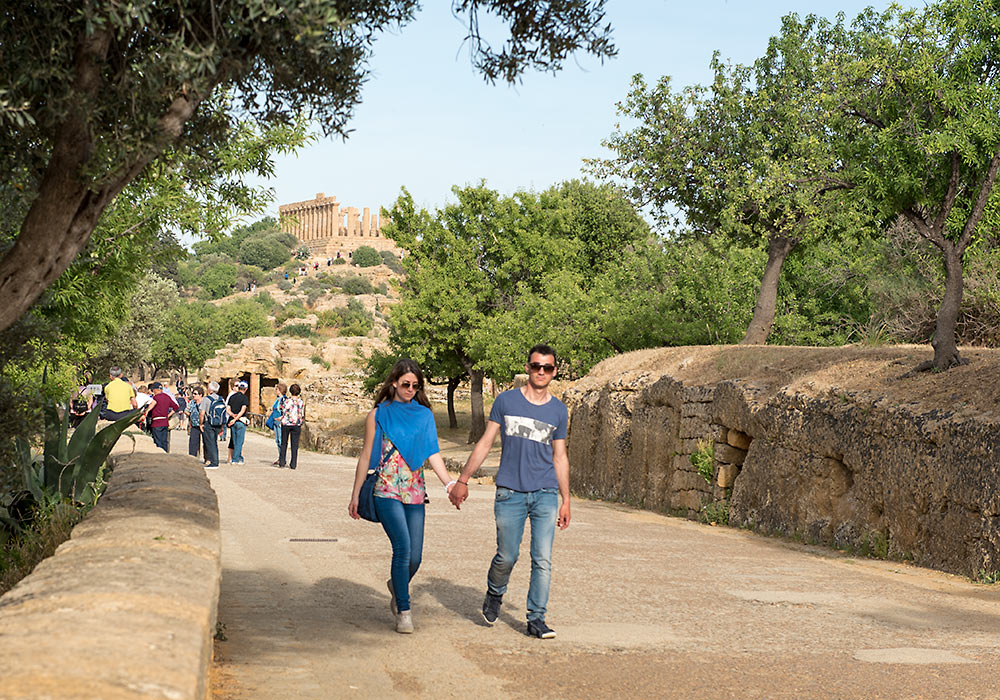 The Valley of Temples in Agrigento is one of the main attractions of Sicily, and a national monument of Italy, included in the UNESCO Heritage Site list in 1997. 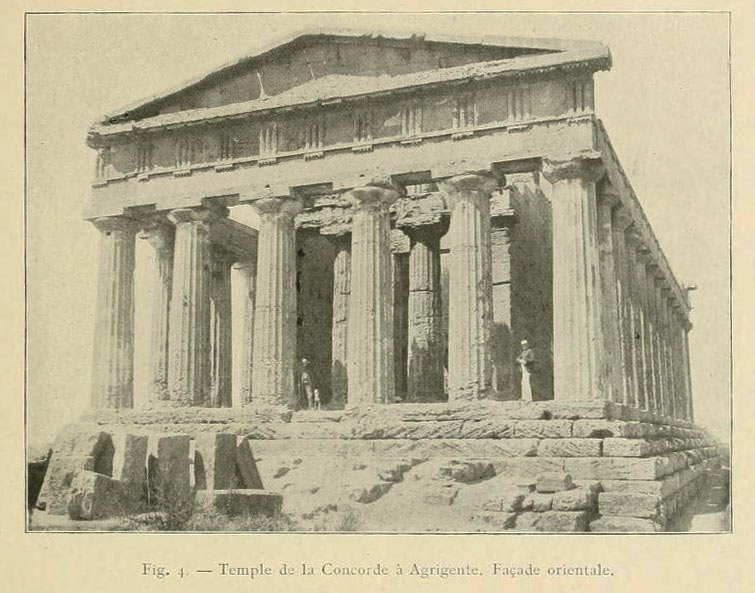 Temple of Concord in the Valley of Temples, Agrigento. Photo must have been taken before 1907.

3D reconstruction of the Temple of Olympian Zeus

Marvellous 3D reconstruction of the Temple of Olympian Zeus (Valley of the Temples, Agrigento) by Federico Moncada. 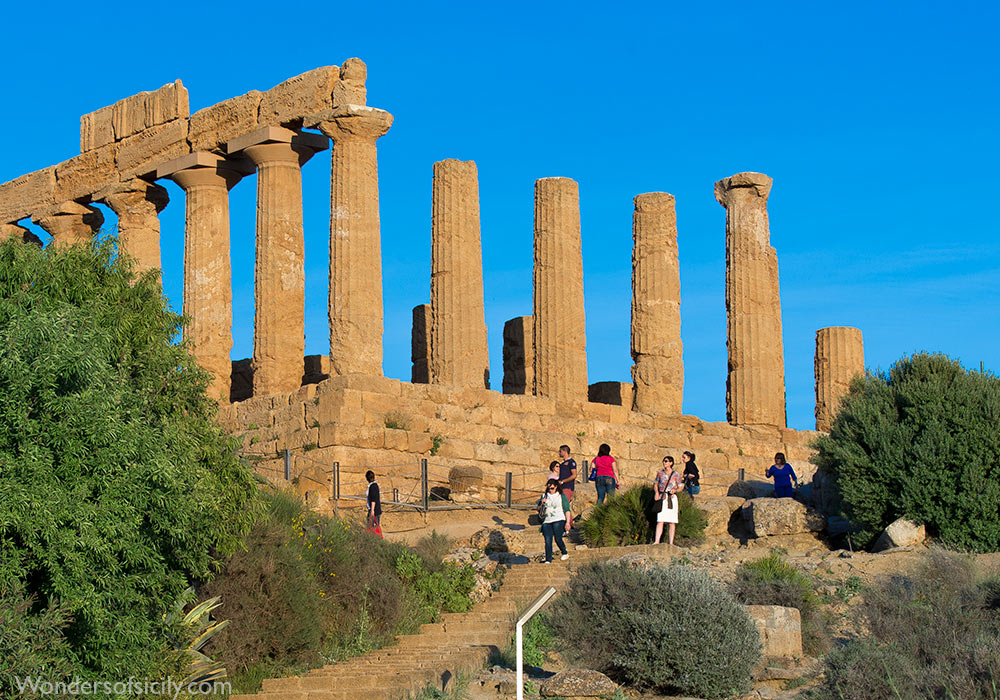 Agrigento - Temple of Hera in the Valley of the Temples.

The Greek Temples in the Valley of Temples

More of interest in the Valley of Temples 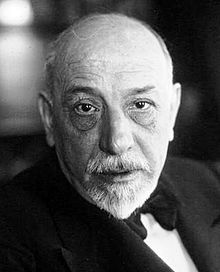 Luigi Pirandello, (1867–1936), Sicily's greatest playwright, novelist, and short-story writer. In 1934 he won the Nobel Prize for Literature. He was born near Agrigento, and was an important innovator in modern drama. The birthplace of Luigi Pirandello is called Chaos, between Agrigento and Porto Empedocles, now a museum. Paolo and Vittorio Taviani's film "Kaos" is based on four of Pirandello's short stories. 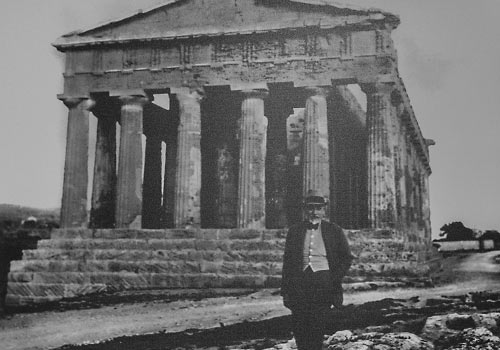 Luigi Pirandello in front of the Concordia Temple (1927). 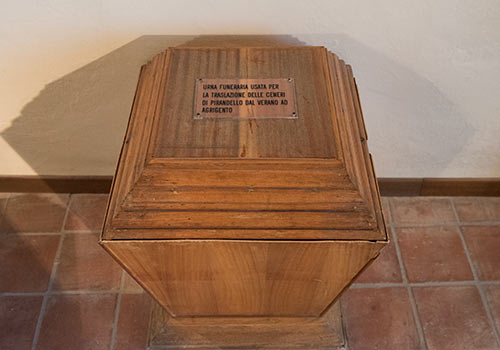